We Belong at Lorimar Winery

We Belong returns to Lorimar Winery in Temecula for a special Christmas show. 39990 Anza Road Temecula, CA 92591 Phone: (951) 694-6699 By making a table reservation, you have reserved the table until 9 pm. You are agreeing to the food & beverage minimum of $40 per person or $30 per person for Wine Club. Your reservation fee will be credited to your bill and food & beverage minimum can be reached with all food and wine/beer/beverage purchases. Cancellation refund policy: All cancellations must be made 24 hrs in advance by calling 951-694-6699 x109

Price: $15.00 - $20.00 Reserve an outdoor patio table to enjoy an evening of live music at Lorimar Winery! (Reservation fee will be applied to your food and beverage minimum)

We Belong at Campland on The Bay

We Belong a Tribute to Pat Benatar and Neil Giraldo returns to Campland in San Diego for a 2 hour concert for all the campers!

We Belong at Lake Arrowhead Village

We Belong makes it's debut at The Lake Arrowhead Village Concert Series. More details to come.

We Belong at Private Event

We Belong at at That 80's Bar Montclair

We Belong at Lorimar Winery

We Belong returns Lorimar Winery in Temecula for a full 2 hour show bringing you all of Pat Benatar's biggest hits and deep cuts featuring husband and wife team Debbie and Mike Sierras as Pat and Neil, with Mike Higbie on drums and Byron Yafuso on bass. Admission is free in open seating or you can reserve a table by calling the winery at 951-694-6699 or go to https://shop.lorimarwinery.com/res-412800/Table-Reservation-For-Thursday-May-6-2021.html 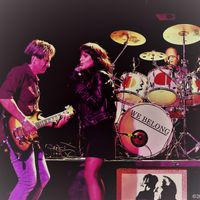 A Carpool Jam Concert Event In The Parking Lot

A TRIBUTE TO PAT BENATAR AND NEIL GIRALDO

We Belong is more than just a tribute to Pat Benatar and her husband/guitar player Neil "Spyder" Giraldo. It's a love story that goes beyond the stage and lights. Following in their footsteps Debbie and Mike Sierras have been married and performing together for almost 30 years making this a fitting tribute to a power duo who's story began in 1979 with their breakout hit Heartbreaker. Whether they are telling stories about the songs, playfully bantering, or rockin the house you will feel as though you are actually at a Pat Benatar and Neil Giraldo concert.

Having performed numerous shows with Pat Benatar's original bass player, Roger Capps, Debbie and Mike gained insides knowledge to the lives of the famous couple. Drummer Mike "Lint" Higbie takes it to another level with his energetic tribute to original Benatar drummer Myron Grombacher along with Byron Yafuso on bass.

With Pat and Neil's blessing We Belong is entertaining audiences all over the West Coast and beyond. Don’t miss this unique tribute to rock n roll's power couple. Catch them soon at a venue near you.

This is a fully socially distanced event in the parking lot. 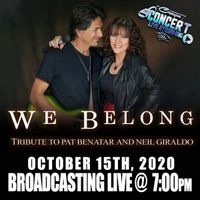 Live stream Concert Event. We Belong will be donating $3 for every ticket sold to the Tofte Family who lost their 12 year son and his grandmother to the fires in Oregon. https://www.gofundme.com/.../help-chris-and-angie-after... See Less

We Belong a tribute to Pat Benatar and Neil Giraldo is back for the reopening of Club 80's Bar in Corona this Saturday. Go to https://www.club80sbar.com in the coming days for information about social distancing rules, including wearing masks and for cover charge information. DJ starts at 8pm with We Belong taking the stage at 11pm. Help keep live music alive by safely supporting this great venue in Corona, Ca

We Belong at Campland on the Bay San Diego

We Belong is back at Campland on the Bay July 17th. Free show for campers. Reserve your campsite now.

We Belong at The Cove

The Cove is now hosting Tribute Thursdays. Join We Belong on Thursday July 2nd for the start of a great holiday weekend. We Belong is a tribute to Pat Benatar and her husband guitar player Neil Giraldo featuring husband and wife team of 30 years Mike and Debbie Sierras along with popular local drummer Michael Higbie and bassist Byron Yafuso. We will of course be playing Pat Benatar's greatest hits and some great deep cuts as well a couple of Rick Springfield hits (Neil Giraldo recordings). Watch the Cove website for tickets to go on sale soon. https://www.thecovebarandgrill.com/event-tickets

We Belong at Fantasy Springs Resort Casino The Rock Yard

We Belong will be performing a free 90 minute show at The Rock Yard. The Rock Yard outdoor concert stage is an amphitheater-style area featuring two side-by-side stages holding audiences of more than 3,000 passionate music fans. The Rock Yard runs from Spring to Fall from and is always live, always free, and always outdoors. New beer and drink specials (often themed to the bands performing on stage) are offered weekly. Guests must be 18 and older to rock. Runs from 7:30pm to midnight.

We Belong Acoustic Duo at The Cove

Debbie and Mike Sierras will perform an acoustic set before Cheap Sunglasses (ZZ Top Tribute) takes the stage at 8pm.

We Belong at Club 80's Bar and Grill Corona

We Belong is back at the venue where it all started. We had our debut here in 2016 when it was M15. The club is now called Club 80's Bar and Grill. We're excited to be back. More info to come.

We Belong is back at Totally 80's Club in Fullerton. More details to come.

You can email us directly at webelongtribute@gmail.com

For The True Love Blues email us at truelovebluesband@gmail.com